Since taking over management in June there has been a 67% increase in revenue per visitor and a 42% drop in cost per visitor. 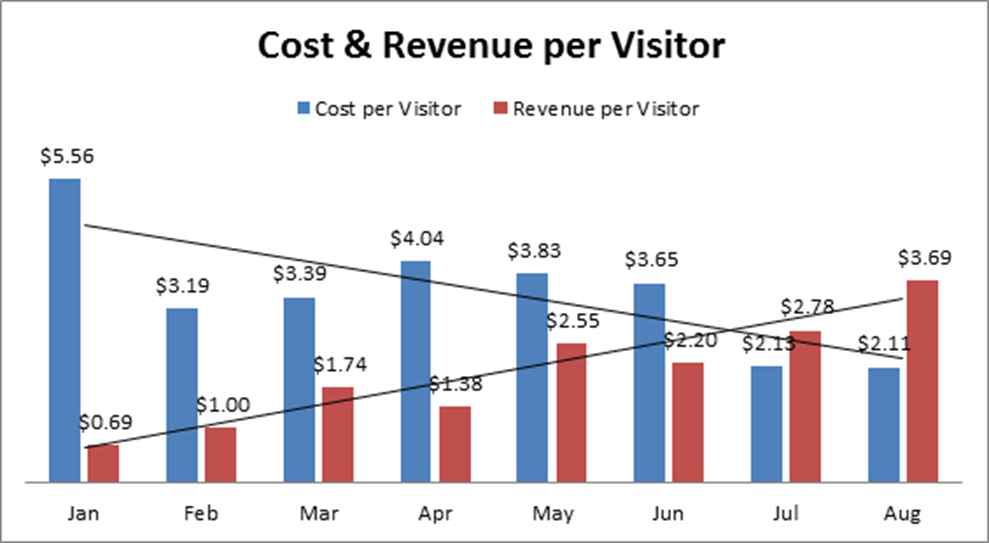 Within the first month the lead count nearly doubled and has increased month over month without any changes to the clients budget.

This account on-boarded about a third of the way through April.  By the end of April the CPA was over 30% lower than the previous month.  By the middle of May–after a full 30 days–the CPA had dropped 60% as compared to March.

This was a campaign we built, which was yielding a 5% CTR (click through ratio) within one week, before any optimization.  This does not include any branded terms. Anyone remotely familiar with paid search knows this was a very well built campaign.

This campaign was launched in mid-February, yielding 11 leads at an average of $22 that month.  Within 8 weeks the CPA had dropped by over 50%, which was accompanied by a sizable increase in leads.

Notice the overall trend of this account for the last 6 months.  The CTR (click through ratio) has gradually increased and both the CPC (cost per click) and CPA have gradually decreased.

By the end of my second month managing this campaign the number of leads increased by 700% and the CPA dropped by 60%.

Since we began managing this campaign in January there has been a significant, consistent drop in CPA.  In addition the lead count has progressively increased and both metrics are at a historic low and high.

After 5 weeks of managing this existing account their CPA dropped nearly 80%.

We took over this account in early January (second dot). By the end of the month the leads doubled and the CPA dropped by 50%.  This trend continued in the second with marked increases in leads and notable decreases in costs.

By the end of my first month optimizing this account their CPA had dropped by over 50% and their lead volume doubled.  Their CPA continued to drop and was down by nearly 70% by the end of the second month.

Get a quick answer